I had a flight scheduled with United at 7:24pm on Sunday, December 21 and on that day (well – weekend), Mother Nature decided to send a Nor’Easter. I had to work TKD but it was a slow day because of all the snow so I was able to check the status of the flight all day. I was surprised to find that it was not delayed at all – at least that’s what it said online. So, I decided to leave early at 2pm to get to Logan airport just in case. I arrived at the check-in kiosk and it told me that the flight I checked into has been cancelled and asked if I wanted to go on standby for another flight that was going to leave at 2:45pm but had been delayed until 4:30 or something – that flight didn’t end up leaving until like 5pm.

So, my baggage got checked in with the flight I was standing by on. Perfect. I got to the gate and asked the gate agent to confirm that I was on standby for that flight – he said yes, so I sat around and waited for like 3 hours. Finally, they called the standby names and my name did not get called so I confirmed with the gate agent that there are no seats left on the plane for standby. Then, I went to another United desk to get standby on a flight for the next day (Monday) since all of the flights for Sunday and Monday were booked full. The lady finally got me a standby for 6am Monday… she said she would put me on a higher priority – not sure if it was because she was just nice or because I had Premiere Associate status with United. Either case, I didn’t believe she’d put me on higher priority for standby.

I headed back to Quincy, without my baggage since it flew to Washington, DC on the flight I didn’t get on. I had dinner with my family, then, I got home and there was a message on the machine from United. It was the lady that I talked to at the desk at the airport. She said she found me a confirmed seat on the 6am flight! YAY! United came through for me 🙂

So I finally arrive, just shy of 8am, in Washington, DC, and I find Daniel and run into his embracing arms! YAY! So began my Christmas vacation week in VA. On Christmas Eve, we drove up to Brian and Brandy’s place in Pittsburgh, PA for dinner – which was very nice. We slept over at the Red Roof Inn somewhere, which was… subpar compared to the hotels Daniel has introduced me to :-p Anyway, we went back to Brian and Brandy’s house for breakfast and gift opening! After we did that, 5 or 6 hours later, we were back in Winchester.

All in all, another wonderful trip to the South – can’t really complain when I get to spend all that time with Daniel <3 oh yeah, he is up here in Boston with me for this week. Looks like I’ll be getting that first kiss when the clock strikes 12 after all! 😉

Muntazer al-Zaidi, a crazy reporter based out of Cairo, Egypt, threw his shoes at President George W. Bush during a news conference in Iraq on December 14, 2008. President Bush dodged BOTH! shoes and was not hurt in the shoe-attack.

Articles on the incident:

If you are a looking for a program that will easily setup the colors of the LED lights on your XPS 630 (and maybe the other XPSs too? I’m not sure – I just have a 630), then you’re looking for a program called AlienFX. With this, you can easily create custom color themes for your XPS. You don’t need to go into the nvidia control panel to do it – I couldn’t find it myself – and this program is pretty simple to use. Enjoy!

<rant>This past week I’ve become ill with a slight cold. This morning at work, I went to open the Dayquil and could only manage to rip the packaging a little bit, where the slit is. I couldn’t open the entire package. As I continue struggling, I’m thinking to myself: Why do these people make it impossible to open up the packages??? My friend came up with the same excellent answer I did: …to sell scissors!</rant>

Originally, my new Dell XPS 630 was slated to arrive at doorstep on 12/15. However, the estimated shipping delivery date was updated to 12/11 And then, it got bumped up to 12/10. Of course, I’m very, very happy about that! I was even more happily when the Fedex dude rang my doorbell at approximately 10am. I was expecting him to be here in the late afternoon so I hadn’t even changed out of my pjs yet since I was working from home to sign for the computer. Anyway, overall, I am extremely satisfied with Dell’s process and delivery time.

As for the computer itself, I’ve already seen one BSOD (Blue Screen of Death) but it’s probably because my wireless usb adapter may or may not be compatible with Mojave (Microsoft Vista) even though I downloaded the Vista drivers for it. Anyway, that’s a separate issue I’m having. Since that first BSOD, I haven’t seen it again so I’m very happy. YAY! Some of you may have heard the horror stories about the first computer I had at my current job. It would Blue Screen at least 2 or 3 times a day and it was a brand new Dell XPS 730. Oh well, it was faulty, what can ya do?

Those are just two sample photos of my computer. For more, please visit my Flickr

Oh, and I noticed a significant in graphic quality when I played Call of Duty 4: Modern Warfare on the XPS 630… tee hee! My all-time favorite feature of gaming machines is that it lights up! Look at the cool LED lights! There are 3 zones in the front and one in the back. The one in the back comes in really handy when I’m plugging in stuff.

Last night, I purchased a brand new Dell XPS 630 on Dell.com. A really cool feature of this gaming machine is that I can change the LED lights that are on the case. TOTALLY AWESOME! Here are a couple of pictures – one of the machine itself, and the second listing the specs and final cost: 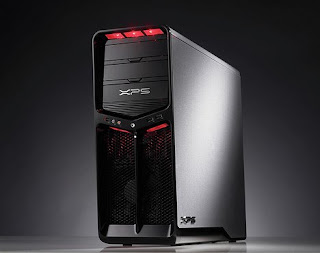 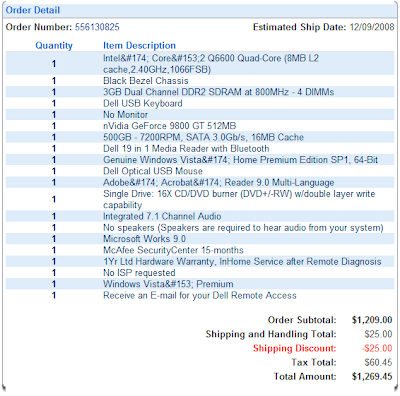 It should ship out 12/9 so I should probably get it in 1.5 – 2 weeks I guess. I can’t wait! It’s going to be totally awesome :-D!!! I’m very excited to try out Call of Duty 4: Modern Warfare on it. Right now, I’m (trying to) playing it on my 3 year old HP computer and it sucks! Even doing normal-everyday things suck on that machine though. Sweet! I can’t wait ’til a good 24″, reasonably priced (on-sale) monitor is out. Hopefully there will be some post-Christmas deals out there for me.

Update: OH EM GEE!!! Dell has shipped my new computer today (12/5) and the new estimated delivery date is 12/11! If they (UPS) manage to actually get it delivered by then, they’ll be 4 days ahead of the original schedule and I will then be super impressed by Dell.